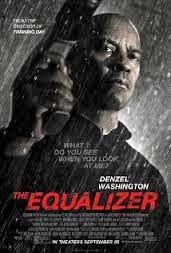 Robert McCall (Denzel Washington) is a retired black ops government operative who lives in Boston, Massachusetts and works at a Home Mart hardware store, where he befriends many of his co-workers and also tries to help a security guard trainee named Ralphie pass his qualification exam. McCall has promised his recently deceased wife that he'd leave his old life behind.
McCall's teenaged friend Alina (Chloë Grace Moretz), who was a child victim of sex trafficking by the Russian Mafia, is brutally beaten by her pimp, Slavi (David Meunier). McCall enters a restaurant owned by the Russian mob and tries to convince Slavi to release Alina by paying him $9800, but Slavi declines the offer. Failing in his nice approach, McCall's training kicks in and he kills Slavi and four of his men, removing all security camera footage.
Russian mafia leader Vladimir Pushkin (Vladimir Kulich) sends his enforcer Teddy (Marton Csokas) to Boston to find and eliminate the culprit. Meanwhile, Ralph withdraws his application for being a security guard at Home Mart to help out his mother at his family restaurant, which was set on fire by corrupt policemen as an act of extortion. McCall confronts the corrupt policemen and forces them to pay back all the money they have extorted. Ralph passes his test and becomes a security guard at Home Mart.
Teddy determines McCall is the culprit; surprised by the skill sets McCall possesses, Teddy decides to capture and press-gang him into service rather than kill him. McCall outsmarts his pursuers and completes more acts of vigilantism. McCall visits fellow retired, married operatives Susan (Melissa Leo) and Brian Plummer (Bill Pullman) in Virginia, who help him acquire intelligence on Pushkin's activities. It is revealed that Teddy is ex-Spetsnaz. After McCall leaves, Susan remarks to Brian that McCall was not actually looking for help, but was actually asking for permission.
McCall captures Frank Masters (David Harbour), a corrupt policeman who has been aiding Teddy, trapping him in his car and flooding the vehicle with carbon monoxide to force him to cooperate. Frank relents and helps McCall destroy one of Pushkin's money laundering operations in Boston. McCall confronts Teddy at dinner, pledging to bring Pushkin's empire down. When McCall destroys a container ship Pushkin used to smuggle goods, Pushkin warns Teddy he can either kill McCall or not come home to Moscow.
Teddy and his men attack Home Mart and take Ralph and the workers hostage, threatening to kill them if McCall does not surrender. McCall enters the store and disables most of the lighting, tells Ralph to get the hostages to safety, and then kills Teddy's henchmen one by one. After a struggle between McCall and one of Teddy's men, Ralph comes back to help but is shot in the leg. McCall tells Ralph to turn on the electricity in exactly 40 seconds. McCall sets up small containers of propane and oxygen in a microwave; the electricity turns it on, causing an explosion that kills the last of Teddy's men. McCall finally kills Teddy with a nail gun.
McCall then travels to Moscow and kills Pushkin's guards, and sets up an electrical trap to kill Pushkin himself. McCall returns to Boston, where he reunites with Alina, who has recovered from her wounds and thanks him for giving her a second chance. McCall is inspired to continue using his skills to help people in need and posts an online advert, identifying himself as "The Equalizer". He soon receives another plea for help and agrees to answer it, ending on a cliffhanger.
By Sha Mohamed at February 26, 2015