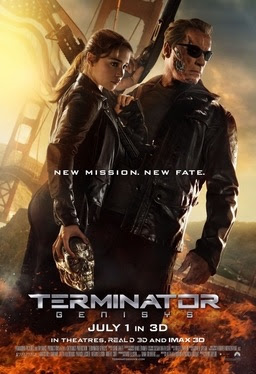 Plot : In 2029, Human Resistance leader John Connor (Jason Clarke) launches a massive final offensive against Skynet, an artificial general intelligence system seeking to eliminate the human race. Before the Resistance wins the offensive, Skynet activates a time machine and sends back a T-800 Terminator to 1984 to kill John's mother,Sarah Connor (Emilia Clarke). John's right-hand man, Kyle Reese (Jai Courtney), volunteers to travel back in time to protect her. As Kyle floats in the machine's magnetic field, he witnesses John being attacked by another Resistance soldier. He then has visions from his childhood about events in 2017.
Upon arrival in 1984, Skynet's T-800 is disabled by Sarah and the Guardian (Arnold Schwarzenegger), a reprogrammed T-800 sent to protect her when she was nine years old. Kyle arrives a short time later and is immediately attacked by a T-1000 (Lee Byung-hun). Sarah and the Guardian join Kyle and destroy the T-1000 using acid. Sarah and the Guardian reveal they have constructed a makeshift time machine similar to Skynet's, and that Sarah plans to travel to 1997 – the year Skynet becomes self-aware. Realizing the timeline has been altered, Kyle is convinced that the future has changed due to the warning he received in his childhood vision. He persuades Sarah to travel to 2017 instead to stop Skynet.
In 2017, Kyle and Sarah materialize in the middle of a busy San Francisco highway and are apprehended by city police. While being treated for injuries, Sarah and Kyle learn that Skynet is called "Genisys", a soon-to-be-unveiled global operating system that is being embraced by the public. John Connor appears and rescues Sarah and Kyle, but the Guardian appears and immediately shoots John, revealing that John is an advanced T-3000 Terminator. While Kyle was being sent back through time, Skynet was in the form of a T-5000 (Matt Smith) disguised as a member of the Resistance. It attacked John and transformed him into a Terminator. John was tasked with ensuring Cyberdyne Systems' survival and traveled back in time to assist them with the development of Genisys.
Able to escape to a safe house, Sarah, Kyle, and the Guardian make final preparations to destroy Cyberdyne's Genisys mainframe. They head toward Cyberdyne's headquarters with the T-3000 in close pursuit. During an airborne chase, the Guardian divebombs into the T-3000's helicopter, causing it to crash. The T-3000 survives the crash and enters the Cyberdyne complex, where it advances the countdown from 13 hours to 15 minutes. Kyle, Sarah and the Guardian plant bombs at key points in the facility while holding off the T-3000.
In a final encounter, the Guardian traps the T-3000 in the magnetic field of a prototype time machine. Both are destroyed, but just prior to the explosion, the T-3000 throws the remains of the Guardian into an experimental vat ofmimetic polyalloy liquid located nearby. Kyle and Sarah reach a bunker beneath the facility, and the explosion sets off the bombs successfully preventing Genisys from coming online. The Guardian appears, upgraded with mimetic polyalloy components, and helps them find a way out of the debris.
The trio travels to Kyle's childhood home, where Kyle tells his younger self about Genisys and instructs him to repeat the warning in a mirror – critical insurance that the events lead to their arrival in 2017. Sarah, Kyle and the Guardian drive off into the country. A mid-credits scene reveals that the system core of Genisys was located in a protected subterranean chamber and has survived the explosion.
Kredit : En.Google.
By Sha Mohamed at August 22, 2015

Email ThisBlogThis!Share to TwitterShare to FacebookShare to Pinterest
Labels: Filem